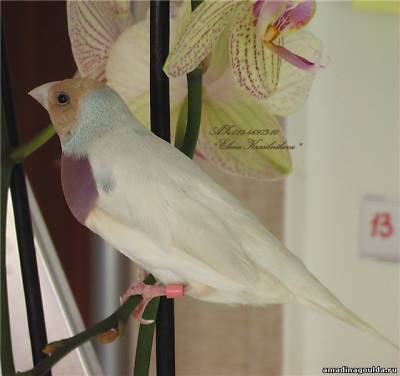 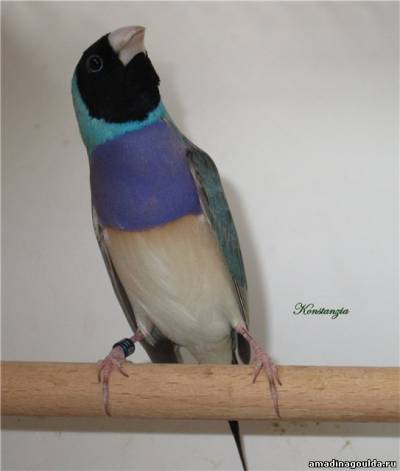 
If you are lucky enough to produce a new mutation how should you go about
establishing it?


Well, first and foremost most new mutations are very weak, so treat them with
'loving care'. They are unlikely to survive the competition in a standard aviary
and are unlikely to withstand weather extremities. The best solution is
therefore, to house them in roomy cabinets or indoor flights in a controlled
climate environment. If the mutation looks particularly weak house only one or
two to the cabinet.


If you can identify the parents and siblings separate them from the rest of
your stock and house one pair to the enclosure so that you can record the
genetics and keep a record of who is producing what.


It is a good idea keep the original pair together. They will likely produce
one or two more mutants.


Pair up the non-mutant brothers and sisters, they may be splits, ie carriers
of the mutant gene.


Over a period, pair up each brother with each sister, as maybe only a few out
of the total are splits. If they are 'carriers' this will produce more visual
mutants.


With the actual mutations themselves, there is a decision to be made. If they
are quite strong, the highest number mutants are likely to be produced by
pairing back with a parent.


If you were lucky enough to have a cock and a hen mutant, then daughter to
father and son to mother would be ideal.


Whichever of the latter pairings you manage to make, monitor the first rounds
produced very carefully because it is very possible the youngsters produced will
be too weak to survive. If this is the case, separate the pairs and re-pair the
visual mutants to a NORMAL outcross.


Do NOT pair to another kind of mutation as you will completely confuse the
genetics and maybe totally modify your new mutation making it very difficult to
recover, or even lose it.


If you are forced to outcross, pair the parents back up together again
because they still represent the best chance of producing additional mutants.


Assuming you are lucky enough to produce some 'splits' from the 'mutant to
normal', again dependent on the vigour of the stock, pair the offspring back to
the mutant parents. This will produce 50% mutants and 50% splits.


This is a good pairing as the outcomes are entirely predictable.


What will produce the most vigorous stock, but is the most 'pain in the neck'
pairing, is to pair the rest of the splits that were produced from the mutant x
normal pairing together.


The challenge here is recognising which are splits and which are normals from
the offspring.


Surprisingly, this is often possible. When the white breast mutation first
became available you could recognise a split because its breast would be
measurably lighter. The recessive Australian yellow split is also usually
recognisable. Often the throat is white instead of black and there is a yellow
spot on the nape. A split pied red headed parrot finch is a 'visual' split and
is actually lightly pied. A black rumped double bar crossed with the white
rumped double bar produces speckle rumps.


Not all splits can be identified but there is a good chance you will be
lucky.


Once this stage of the process is complete it is a question of producing as
large a number of mutants as possible and outcrossing as often as possible with
a view to increasing fertility and vigour.


Right up to the latter stages it is best to use fosters as any mutants you
allow to rear their own nestlings are likely to die from the stress, that is, of
course, if you have managed to get them to self rear in the first place. That in
itself is a fairly rare event in the early stages!


The other problem of course is that they are likely to be highly infertile.
It is frustrating to leave a new mutation to 'waste time' sitting on a clutch of
infertile eggs. You can take probably 30-40 eggs from a reasonably healthy
mutant before any signs of stress. It is rearing nestlings which 'drains' them.


Which foster you use and how you go about it will depend on the mutant
species, but to give an example I will inevitably use the Gouldian--------- What
would you expect? It's me!


By far the best foster for Gouldians is the Bengalese. You could use normal
Gouldians but they are prone to desert a nest full of mutants as the mouth
markings or gape tubercules are often not normal either.


The Bengalese mouth markings are naturally variable and in any case they
don't seem to mind a wide variance. They also tolerate constant nest box
inspections and general interference which is very useful.

The technique will vary with the species to be fostered.


The first consideration is food. Is the species to be fostered largely
insectivorous when rearing nestlings? And if so for how many days? Some species
require a high green food content etc etc.


Nothing to do with the species we are going to cover, Gouldians, but with
some of the species which are almost entirely insectiverous for the first 4 to 5
days, it is important to remove all hard seed and feed only insects and soft
food.

So for successful fostering 'the devil is in the detail'

So back to the Gouldian. Compared with many species the Gouldian is relatively
easy to foster.


It is neither insectiverous or largely herbiverous and therefore requires no
particular special dietary requirement. However its breeding cycle is longer
than the natural breeding cycle of a Bengalese. The hatching time of a Gouldian
is 16 days compared to the 14 of Bengalese. Gouldians fledge at 21 days,
Bengalese 18 and Gouldians are just about independent at 35 days old. Bengalese
of course quite a bit less. The effect of this if we do not manipulate it is
that many pairs of Bengalese will not successfully rear Gouldians to maturity
which is why you will speak to many people who have 'dabbled' in fostering and
then given it up once they found it wasn't the easy option they had been led to
expect, ironically, usually by someone who had never fostered in their life!
'Don't believe in fostering mate'!!


So to start then. The important thing is to get your Bengalese into peak
breeding condition. Fosters in poor condition usually 'run out of steam' when
the nestlings are about 10 days old. If you lose nestlings at this stage check
the management of your Bengalese.


To keep up with a pair of normal Gouldians you would need 3 pairs of
Bengalese. Mutations may be more erratic.


You need to have a pair of Bengalese on their third egg just as the Gouldians
finish laying their first clutch.


Transfer the eggs from the Gouldians to the Bengalese after first marking the
Gouldian eggs with a standard solvent based felt tip pen. It won't do any harm.
However, do not touch the eggs with your hands, The sweat on your hands will
damage the natural protective coating on the egg and allow bacteria to penetrate
and badly affect your hatching rate. The ideal tool is special egg calipers
which are readily available in Europe. In the Southern hemisphere you can make a
good transfer spoon by taking a plastic spoon and dipping it in hot water then
bend the sides tightly in. The other alternative of course is to wear surgical
gloves.


Marking the eggs is important because remember we transferred the full clutch
of Gouldian eggs when the Bengalese fosters had just laid their third. At this
stage Bengalese begin sitting properly and it 'steals' 2 days off their natural
breeding cycle. Hence the effect of the Gouldians longer hatching time is
negated. Remove any additional Bengalese eggs as they are layed, it is important
not to attempt to rear a mixed brood as the fosters will preferentially feed
their own young and allow the fostered nestlings to die.


This timing thing is an important part of getting the Bengalese into the
correct phase as the first few days of a nestlings life are critical with their
digestive processes at their most rudimentary. Parents which are in the correct
phase of their breeding cycle produce a largely increased amount of digestive
enzyme saliva. The food they consume to feed the nestlings is coated in a
generous amount of these enzymes whilst in the beak and throat and then passed
into the crop where it is ground into a porridge and allowed to sit for a period
whilst it is warmed and partially digested. This process increases the
availability of simple sucroses and glucoses and simplifies the digestion
process for the nestlings.


With Gouldians, soft food and normal seed may be fed throughout the rearing
of the nestlings. With say Grenadire Waxbills you will need to feed live food
and soft food only for the first five days, on the sixth day add sprouted and /
or green seed, Hard seed should not be introduced until after the nestlings
fledge.


Incidentally, using a team of two cocks and one hen works well, however, a
team of two hens and one cock is a disaster as neither hen will be in the same
sequence and will want to lay instead of feeding. This also distracts the cock
from his duties. Normally, I use a pair with the odd trio if I have a surplus of
cocks.


Once you are over the first five days, it is usually 'plain sailing' and the
Bengalese will fledge and wean their charges without trauma. However, with the
more difficult species you may still need to manipulate nature.


Crimson Finches for example take a lot longer than most species to become
independent and wean. In which case, you will need two teams of fosters in
different phases. Get over the first seven days with the first team and then
swap over to a new team which were just about to hatch eggs. Moving the
nestlings over at dusk when they have a full crop will usually do the trick.


The new team will brood them happily over night, by morning the nestlings
will have picked up the scent of their new foster parents, who may be slightly
surprised at how the small eggs they sat on produced such large nestlings, but
will never the less diligently carry on the feeding duties .


As you may gather, it needs a lot of skill and dedication to establish a new
mutation, this is why so few ever make it.


A new mutation of any species usually commands a high price and good luck to
the people who manage it, they have earned whatever they get !